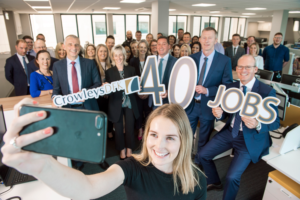 An Tánaiste and Minister for Foreign Affairs, Simon Coveney joined James O’Connor, Managing Partner of accountancy firm Crowleys DFK today at the firm’s recently refurbished Cork office in Lapps Quay to announce the creation of 40 new jobs in Cork and Dublin over the coming two years.

Crowleys DFK is one of Ireland’s leading indigenous accounting, tax and advisory firms. Founded 44 years ago in Cork, the firm has experienced three consecutive years of over 20% growth and currently employs 90 staff across both cities.

Recruitment is underway as the firm looks to fill roles across a range of specialties including Internal Audit, IT Audit, Risk Management, Advisory, Cloud Accounting and Public Sector Services as well as roles in its core Assurance and Tax Departments. Of the 40 new hires, 26 will be filled by experienced candidates with college graduates filing the remaining 14 roles. 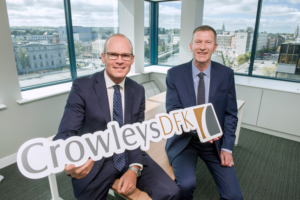 James O’Connor, Managing Partner of Crowleys DFK, said at today’s announcement: “We are delighted to announce these 40 new jobs across our Cork and Dublin offices. Our business has changed dramatically in recent years. The demand for access to trusted and experienced business advisors has resulted in an increased need for more innovative client solutions. Therefore, in conjunction with these 40 new roles we will also be investing in new technologies and introducing new service lines including Data Analytics, Business Process Improvement and HR and Marketing Consultancy.”

Crowleys DFK’s client base includes indigenous owner-managed businesses, and subsidiaries and European headquarters of overseas SME and multi-national companies. The firm’s national presence in Ireland is supported by their international reach through DFK International. Crowleys DFK has been a member of this global network of independent accounting and business advisory firms since 1993.

An Tánaiste Simon Coveney said: “I’m delighted to be here today for this significant announcement of 40 new jobs. Crowleys DFK is a great example of a local business achieving national and global success through ambition, innovation and a commitment to investing in talent. I’m particularly pleased to see Crowleys DFK provide career opportunities not only for homegrown and overseas professionals but also for our next generation of talent through their graduate programme.” 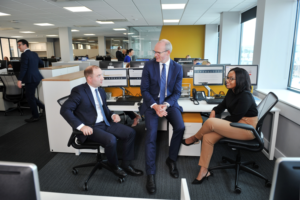 An Tánaiste and James O’Connor were joined by Gloria Ramasia and Robert Graham, two new staff members of Crowleys DFK. Gloria Ramasia said: “I am thrilled to be starting my career with Crowleys DFK – it is a company that is really thinking about the future of our industry and I look forward to being part of it”.

“We believe this announcement is an important building block in our future growth. It also highlights our commitment to providing innovative service offerings to help our clients navigate the complex and sometimes challenging issues of today’s modern economy. The continued success and growth of the firm is a testament to the dedication and hard work of all our staff. I am excited with these new developments and what the future holds for Crowleys DFK”, James O’Connor concluded.

Crowleys DFK today announced a number of senior promotions to Director and Manager positions across the Firm.

Managing Partner, James O’Connor, said: “We are delighted to announce these exciting new promotions. They are well-deserved and reflect the hard work, professional growth and commitment of all those promoted.”

After qualifying, Shane moved from audit into the firm’s advisory team, specialising in Cloud Accounting and Business Process Improvement Services. Recently he has led a number of high-level client advisory assignments, including implementing business outsourcing and performance improvement projects for clients across a range of sectors.

David Stuart has been promoted to Manager in our Accounting Services and Outsourcing Department. A Chartered Certified Accountant and Xero accredited to the highest achievable level, David will manage our Cloud Accounting Services.

An experienced Internal Auditor, Rosalyn Banua has been promoted to Manager of the firm’s Governance, Risk and Compliance Department. Since joining the firm in 2015, Rosa has worked with an extensive portfolio of publicly funded bodies, semi-state agencies and private sector organisations.

James concluded: “We believe that these promotions are an important building block in our future growth ambitions and the further enhancement of our services to clients. It also highlights our commitment to the long-term career development of our staff.”

April 12, 2018/by Alison Bourke
https://www.crowleysdfk.ie/wp-content/uploads/Crowleys-DFK-041-cropped.jpg 2316 4446 Alison Bourke https://www.crowleysdfk.ie/wp-content/uploads/crowleysdf-chartered-accountants-1.png Alison Bourke2018-04-12 17:01:552019-11-05 11:17:45A Trio Reunited
Scroll to top
This website uses cookies to improve your experience. We'll assume you're ok with this, but you can opt-out if you wish.Accept Read More
Privacy & Cookies Policy
Necessary Always Enabled