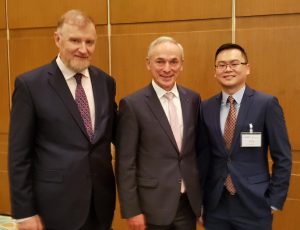 Minister Bruton addressed the local network of business and education leaders for Enterprise Ireland’s business breakfast as part of his five day education and trade mission to Malaysia and Indonesia.

“I am delighted to have the opportunity to greet an Irish Minister in my home country,” Vincent commented, “Congratulations to Ambassador Hickey and Enterprise Ireland on hosting a successful business breakfast.” 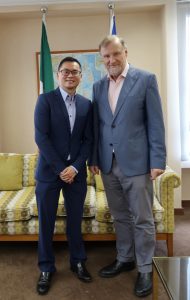 Vincent commented, “I am very grateful to have had the opportunity to meet Ambassador Eamon Hickey in the Embassy and for his continued support to our efforts in promoting bilateral trade relations between Ireland and Malaysia.”

“We plan to reach out to the relevant Ministries in Malaysia in the hope of hosting a ministerial visit to Ireland in the near future,” stated Vincent.

The objective of the Irish Malaysia Association is to support bilateral business links between Ireland and Malaysia. Crowleys DFK is a patron member of the IMA and is dedicated to supporting its development.

Ireland enjoys an enviable reputation as a business-friendly location and it’s not just global giants who reap the benefits, says Edward Murphy, Partner and Head of Tax Services.

Ireland is home to many of the world’s most successful companies. Sixteen of the top twenty global technology firms are located here as are twenty-four of the twenty-five top biotech and pharma companies.

However, it is not just global giants that reap the benefits of doing business in Ireland. Many smaller companies also take advantage of the pro-business culture and ease of access to EU markets.

One reason for Ireland’s foreign direct investment (FDI) success is the favourable tax regime. There are double tax treaty agreements in place with 72 other countries and the 12.5 percent corporate tax rate is one of the lowest in the EU.

Other advantages include an attractive holding company regime and tax incentives for certain types of investment. For example, Irish-resident companies carrying out qualifying research and development activity can avail of a ‘Knowledge Development Box’ where eligible profits are taxed at a rate of just 6.25 percent.

Tax not the only reason to locate in Ireland

While tax is undoubtedly an important consideration, it is not the only reason foreign businesses choose to locate in Ireland. Other influences include:

US and Canadian Companies in Ireland

Around 700 US companies are located in Ireland, employing more than 150,000 people.  Anecdotally, US technology companies report that they can hire two engineers in Ireland for the price of one in Silicon Valley, with higher multiples for some engineering specialties.

Notwithstanding the Trump administration’s recent tax reform package which will see US corporation tax rates fall from 35 percent to 20 percent, Ireland’s corporate tax rate is still only around half the US rate when federal taxes are taken into account.

Canadian interest in Ireland is also growing. The EU-Canada trade deal which provisionally came into force in September 2017 will create further opportunities for Canadian businesses seeking to set up in Ireland.

At a time of global economic and political uncertainty, Ireland offers a stable, pro-business environment and is an excellent location from which companies seeking to establish a base in the EU can develop and expand their businesses.

Crowleys DFK assists many foreign owned companies to set up operations in Ireland. For more information and to discuss your specific requirements, please get in touch.

What Our Clients Say

February 21, 2018/by Alison Bourke
https://www.crowleysdfk.ie/wp-content/uploads/Foreign-Investment.jpg 600 1600 Alison Bourke https://www.crowleysdfk.ie/wp-content/uploads/crowleysdf-chartered-accountants-1.png Alison Bourke2018-02-21 14:16:432019-10-16 12:08:09Benefits of locating your business in Ireland
Scroll to top
X We use cookies in our website to give you the most relevant experience by remembering your preferences and repeat visits. By clicking “Accept”, you consent to the use of the cookies explicitly. Visit Cookie Settings to know more about the cookies used on our website.
Reject Accept Settings
Cookies Policy